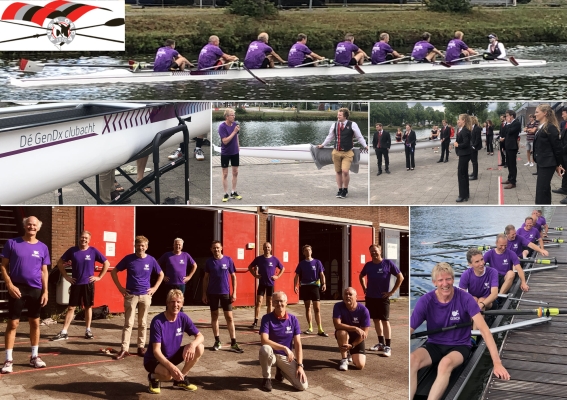 2020 is a milestone year for both GenDx and student rowing club Orca. While GenDx celebrates its 15th anniversary this year, Orca will reach its 50th anniversary in October, a huge accomplishment for both.

GenDx CEO Wietse Mulder has been a member of Orca from 1983 to 1996, participating in several rowing races with his Orca team ‘Dé clubacht’. Several other Orca teams were competing at the same time, and there was always some rivalry over which team would get to use the best 8+ boat. As Wietse and his team did not always win the boat struggle, they jokingly said that one day they would buy their own boat.

In the milestone year 2020, Wietse decided to buy the boat for Orca, and on Saturday, August 22, Wietse baptized the brand new 8+ Filippi boat in the presence of current Orca members, as well as his former team members. During the ceremony, Wietse elaborated on his reasoning to support the club and referred to two of his main entrepreneurial strategy principles: ‘Dare to share’ and ’Do not always expect a return of investment’.

After the ceremony, pictures were taken of the boat and the (former) Orca members, taking the COVID-19 restrictions into account. The pictures show the beautiful boat with special GenDx graphics, designed by Leon Hulst from WAT Ontwerpers.