Skip to content
GenDx > Blog > BLOG: Together to the Top: the summit 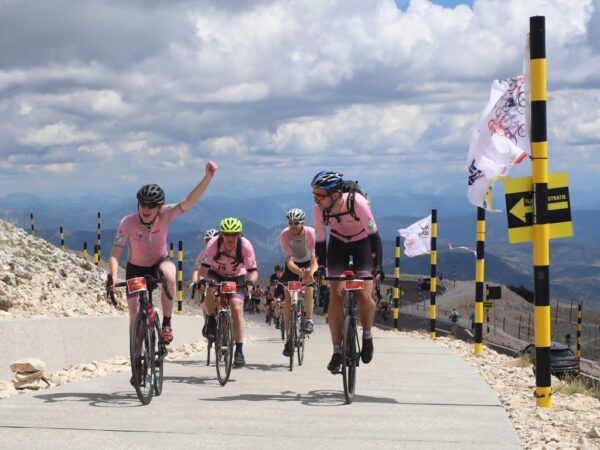 In this blog, we follow the journey of our colleague Henk van Laar, to reach the summit of the Mont Ventoux in June 2022. Henk will be joining the Give&Live cycling club, which is a group of cyclists that are either organ- or stem cell recipient, donor, or working in the field of transplantation. GenDx sponsors the event, and Henk is the lucky GenDx representative to support the Give&Live cycling club on their way to the top of the mountain.

The alarm goes off at 5.45 AM. It is a chilly morning, but it is sunny and we can see the top of the Mont Ventoux very clearly.

The bakery ‘only’ opens at 07.00 AM, so for those who are leaving extra early, the catering team does a great job at improvising breakfast. They also make sure all bottles, bags and pockets are completely stuffed with drinks, bananas, gels and bars. As if we were going for a 24-hour ride.

Part of the group gets on their bike for the first part to Sault, while part of the group is taken there by car. Once there, another pit stop awaits us to get hydrated and fuel up on some fast carbs. Then, very suddenly, we are given the go-ahead. The start is a bit messy, but eventually everybody is on their bike, on their way to the Mont Ventoux!

The first part goes downhill, which feels a little too easy, but that is soon followed by the first increase. It is difficult to find the right tempo, and it is not easy for the mind to realize that the last part of the climb will be the toughest. Gradually, the tempo gets more comfortable. Everybody needs to find their own tempo. This means that sometimes, others will catch up with you, and sometimes you will be the one overtaking others. You just have to ignore it and ride your own race. One thing is for sure: the buddy will always stay with the athlete. But also the company of other cyclists can be very supportive.

I also notice the many motorbike drivers carrying a first aid kit. On the one hand, this is reassuring, but on the other hand this makes me realize that they are not there for nothing…

We pass another aid station. I make sure to take what I need, because it is easy to overdo it with all there is up for grabs…

The ride gets a bit easier up to Chalet Reynard, which is a little further than half way through. But after this point, it is getting steeper again. By now, you are used to climbing and the determination to push through has kicked in. The environment gets rougher and more barren. The wind gets stronger and the sun is relentless. One more turn, and there it is: the summit is in sight! The photographer is making pictures of the surroundings, and is surprised to see us so soon. He did not expect us to be here already…

We pass the Simson monument; we will only pay it a visit on our way down. For now, the target is locked. A right turn, the summit on our left. They say it will get easier after the next turn, but now we are almost coming to a standstill. It hurts to keep going full force, but you have to, and you can, even without ‘standing’ on the pedals.

A left turn, and then finally… a little less tension on the legs! You hear the people screaming from the top, encouraging you to keep going. In theory, you’ve made it, but not quite yet. There is no way you are giving up at this point! Trying to take the turns in such a way that you are avoiding the steepest parts, keep going, there is no way you are going to get off your bike to walk the last part! One final, very tight, turn to the left… it looks steeper than it is and it takes less effort than expected.

And then there’s the cheering, the time tracking mats, the felicitations… you’ve made it! Unbelievable. Everyone processes it in their own way, with all kinds of emotions. It is extra special to see the family and friends that have been waiting for the athletes to reach the top.

Some cyclists are daring to descend partially, to pick up others and join them on their way to the top. In my opinion, you will always make it as long as you keep taking it slow.

After taking lots of pictures on the summit, we go down again, in small groups. Some by bike, and some by car. On the bike, you easily reach speeds of 30, 40, maybe even over 50 km/hour. It is not possible to hit the brakes all the time. For some, it gets a little too inconvenient, and luckily there’s the option to do part of the descend by car and finish the last part on the bike.

Remember that first part from Sault? That decline? Well, on the way back that is an incline. An incline of 6% that is not necessarily appreciated. Especially since it is quite warm in the valley at this time of day. But… all is good once we reached a nice terrace, with an amazing view of the Mont Ventoux (the greatest view really comes after the toughest climb). The group starts with sharing stories, and won’t stop for the coming days.

We headed back to the base camp. Twelve kilometers, and that final hill with 15% incline. My legs tell me that they have had enough. Now it is time to rest and digest. Good thing there’s a BBQ waiting for us! One of the medical buddy’s mentions: “I do not know if I will be able to bike along next time, but I will certainly join for the food!”

Eventually, everyone has reached their own personal goal today, which was not necessarily reaching the summit of the Mont Ventoux. Even though the journey to the summit was the pinnacle event of this trip to the South of France, the Give & Live cycling group is really about training together and keeping each other motivated to stay fit and healthy.